James is well known in Auckland and overseas as an accomplished painter and printmaker. His works are widely exhibited and he has won awards from his drawing, printmaking and painting. He enjoys energy, movement and colour when painting so they become a rhythmic combination of feelings and thought combined with formal considerations. 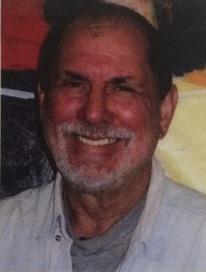 Personal statement from James Lawrence about this work:

Like all artists, I am concerned with light. I study its movements across water. The shadows cast on weather cliffs and how buildings and human habitations are transformed as light travels across these surfaces, including marks made by hand(s).

I have synthesised this keen interest with the re-investigation of the origins and though of some of the various movements within Twentieth Century Abstract Art. I paint intuitively, "The Flow" is through me creating a rick complex of textures ans shapes that is equally controlled and random, filled with accidents, abrasions and then re-establishment or partial re-establishment of hidden shapes or movements, which allows light and the viewer's position, be it close or far, or off to the side, to offer constantly changing sensations with corresponding fluidity in the perception of form(s).

The Pentimenti created by overpainting, that is, allowing the underpainting its "voice" creates a depth, much like looking into a bottomless pool of water, complete with sky reflection. Paintings may give the impression of completeness, but at the same time represent a provisional statement, as I may be just around the corner with a large brush. As to the concept of "Finish" I continuously work on several paintings at any given time. Sometimes I cease working on one or more of these canvases while continuing to work on others. Thus the painting becomes finished when I no longer paint on it. I often discover something I like on one painting, and use it on others while over-painting it on the original.

I enjoy energy, movement and colours. For me, painting is "letting go!". The works thus created represents a distillation of person expression, with gestures (marks) and discoveries. For me a successful painting is flat and spatial at the same time with a balance of structure and expresssiveness and with a spontaneous, complex and sensual surface, creating layers, that one may "enter". I hope my art speaks to something in us all that transcends the realm of words.

I believe that painting non-objectively allows the intuitive nature of the painter its voice. It also affords the widest possible range of interpretation, including contradiction. I like the idea of the meaning being felt, rather intuitively by the view, rather than a meaning being expressed, as once this occurs it tend to preclude other meaning. It's difficult to answer questions about how I felt or what I was thinking other that to say it felt good, because when it doesn't, I paint it out. On the good days, the painting speaks to me and a most enjoyable dialogue ensues. I can't think of anything I'd rather be doing.